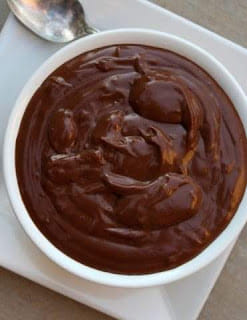 In a pan, heat the milk until it almost boils. Meanwhile, in another pan, melt the butter and sugar over a low flame until they turn to liquid, remove from the heat and whisk in the cornflour, making sure there are no lumps.

Still off the heat, gradually add the milk to the butter/sugar/cornflour mixture, whisking constantly.

Put the pan back over a low flame and, always stirring, bring it back to an almost-boil, which should take about six minutes. Add the chocolate and whisk strongly for another minute so it melts. Scrape into a bowl or mould, or six individual glasses or cups, and chill for at least five hours.